He followed her into the woods. She walked, rather ambled through the dry leaves. The rustling thundered across the air. It echoed through the quiescence of the surrounding. His heart raced fast. He moved his feet discreetly, avoiding the dry leaves, lest she heard his footfall. She seemed strangely comfortable moving through the woods. Her long black attire nearly blended into the inky black of the night. He stopped. His heart beat faster than ever. Why was he following her?

He had seen her for the first time a week ago. On the last train on his way back home. Their eyes had met for a second and she had smiled. He’d reciprocated. Then she’d looked away. He hadn’t.

He fumbled for a cigarette in his jeans pocket. There was none. He could use a long puff right now to calm his senses. Instead he found a lighter. Lumping his fear, he looked ahead. The girl still rambled on in a lazy manner. Was she luring him into a greater darkness?

She would stand in one corner, even though there were plenty of empty seats around. With every day her stare had only gotten deeper and sharper. Tonight her eyes had been fixed on him. Not for a moment had they deflected. He had found it uncanny. Yet stimulating…arousing. And therefore he couldn’t resist the last piercing look that she had thrown at him before getting off the train. He’d come running after her.

His legs froze as she turned back suddenly. The darkness had clouded her face. Her black ensemble fluttered in the air. He could tell her eyes had caught sight of him. He stayed put. She took a step. Dew of sweat formed on his forehead. He slid his hand furtively into his pocket and fished for the lighter. She moved fast. And in no time, she was only an inch away from him. He retreated in fear. A smell, rotten and mucky, filled his nostrils and benumbed his senses. He mustered all his strength and lifted his hand up to his face. In the quivering flare of the lighter, he caught a glimpse of her. The next moment, the lighter fell off his shaking fingers. It was not her.

The hair on his hands stood on end. And a voice, stony and shrill, broke through the heavy air into his ears, ‘remember this face? Sure you do…if not, let me remind you by offering the same death that you and your friends gave me.’ 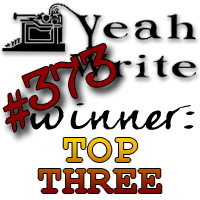 Done With Her… – The Debut Novel by Chirasree Bose